I broke the LCD display on my 3-year-old Kyocera Contax SL300RT*. Normally my next step would be to order the latest model in that line, it has served me well and I really like the features and design of the camera... sadly, they discontinued the entire product line last year. Not only that, but the particular features I liked don't appear to be in any competing compact camera - being able to attach lenses and filters, and very fast time-to-first-shot due to not having to extend the lens on powerup. 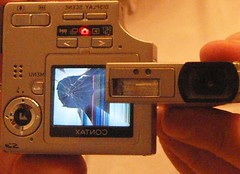 Looks like it's even going to be difficult to find an original model - ebay only shows batteries for it, not the camera itself.

Anyone got suggestions, or favorites, among the modern compacts? I'm afraid my requirements may eliminate everything actually on the market :-) In particular:

* fits in a pants pocket
* has optical zoom, 3x or better
* has some kind of lens mount [24x optical zoom is an acceptable substitute]
* fast-repeat full-res stills as well as 640x480 video
* at least some manual settings
* long exposures of 10s or better

There turn out to be plenty of options I *don't* care about; it's easy to find compacts with more than 4m pixels and image stabilization, for example. Any suggestions (including "get the latest exilim and be happy with it"? :-)

(And yes, I really do take shots of the form "wow, the moon looks really funky right now - pull out camera, take framing shot, pull out lens, mount, set a few manual overrides, shoot while braced against a parking meter", it's not as gratuitous as it sounds.)

update 2006-05-22: got some suggestions from the DPReview forums, made an unsuccessful foray at ebay after finding better keywords - and am giving the Nikon Coolpix S4 a try - 10x zoom, swivel, time-lapse. Should be interesting, at least...
Collapse