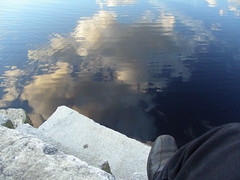 Missed October, but I have been writing - just not here. I finally got a technical blog together... or rather, turned my README files into blog entries (easier to code around than to change habits, of course :-) The RSS feed is here but there isn't yet a matching HTML page; the individual projects already have their own renderings (and individual feeds, if you only want the Rants page and not the rest of the coding projects.

Update: The RSS feed for everything is probably more interesting than just the python one, though it's still overall a highly technical space.

As part of putting the tech blog together, I realized that I'd actually managed to write code and prose combined at about half the rate expected from NaNoWriMo without particularly trying. There are threshholds of course and technical material is pretty much entirely unlike novel writing, but it does mean that if I ever getting around to writing a technical book, it's not unreasonable to get it started in a few months of spare time. (Not that I particularly want to write a book, though I have gotten a kick out of getting published in the past - but if there's ever (again) something I'm uniquely suited to write, I intend to do so. The time for a kerberos or zephyr book was about 10 years ago, though, and "Startup Infrastructure and Culture Building" is more of a howto or a "hire me to do this on the side while I'm solving hard engineering problems too", and it'll be kind of boring to read unless you're in the middle of putting something together... and most of the tools are changing in real time, especially if you're not paranoid and buy into using lightweight web1.9999 services instead of infrastructure.)

Hmm, I still haven't written up Iceland stories. There's a chance of another (shorter) trip to Iceland (or possibly Stockholm or even Rome) before the end of the year. And then there's this "Interesting python job in Stockholm" note that I just got (but it doesn't sound like short-term consulting so it's not a real option - it's just that usually, when I'm not looking, things like this don't fall in my lap, so it was a bit of a surprise. And one problem with being a "startup specialist" is that Europe (except perhaps for Ireland?) is startup-hostile, even with other reasons to spend time there.) Two words: "tiramisu shake" :-)
Collapse